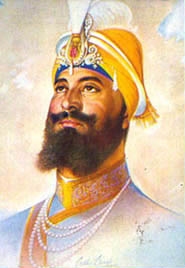 Guru Gobind Singh ji (22 December 1666 – 7 October 1708) was the tenth Guru of Sikhism. He was born in Patna, Bihar in India and became a Guru on 11 November 1675, at the age of nine years, succeeding his father Guru Tegh Bahadur. He was the leader of the Sikh faith, a warrior, a poet, and a philosopher. In the Sikh society, Guru Gobind Singh is considered a perfect example of manhood; highly educated, skilled in horsemanship, armed combat, chivalrous, and generous in character.

Guru Gobind Singh ji’s life and teachings have had a lasting impression on Sikh ideology as well as in their daily life. His establishment of the Khalsa is considered as one of the most important events in the history of Sikhism. He fought twenty defensive battles with the Mughals and their alliances, such as Rajas of Shivalik Hills. Guru Gobind Singh ji was the last human Sikh Guru; and in Nanded he declared the Guru Granth Sahib, the holy scripture of Sikhism, as the next permanent Sikh Guru on October 7, 1708.